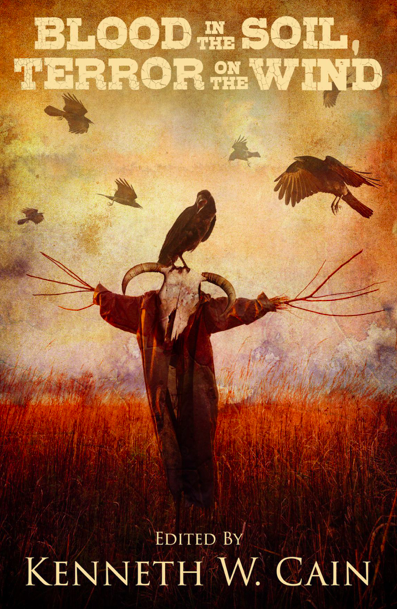 Craig E. Sawyer is an American writer known for horror, western, sci-fi, and crime. He has been published by Quill & Crow Publications, Brigid’s Gate Press, Shotgun Honey, Weirdbook, Schlock Publications, Crystal Lake Press. Craig traveled much of the United States, eventually settling on the West Coast, and before becoming a writer he worked as a bartender, roofer, carpet weaver, bouncer, and actor.

About “Owl Witch of the Comancheria” and the Anthology

Craig’s story “Owl Witch of the Comancheria” is in the anthology Blood in the Soil, Terror on the Wind edited by Kenneth W. Cain, published by Brigid’s Gate Press.

Texas Ranger turned bounty hunter, Captain Sidacious Tomlinson, is captured by Comanche warriors whose children are being taken by an evil being called the owl witch.

About the anthology from the publisher:

Whether in an old weathered mine shaft, somewhere off the beaten path, out in the woods, or right here in the middle of this ghost town, danger awaits. We’re going to take you way back, drop you right smack dab in the middle of the Old West at its finest. But we’re not just going to give you shootouts and bullet wounds and blood splatter. Yes, those things are prominently featured, but there’s so much more to this anthology of western horror.

Maybe it’s a well-known creature popping in for a visit, or some new creepy crawly monster sucking out your soul, we’re going to turn the Old West inside-out and explore its guts to the fullest. There are new adventures to be had, monsters both familiar and unfamiliar to be thwarted… And we’re not always going to be the victors. Life in the Old West is hard, trying at its best, and it can wear you down quick.

So, prepare yourself to be transported back in time. Get yourself up on that rickety stagecoach, draw your guns, and let’s get going. There’s vast territory to cover here, and your journey begins now.

Tell us about yourself – what is something readers would be surprised to find out?

I am a descendant of the McCoy family, as in the Hatfield & McCoys.

What is it about the Weird West genre that draws you to it? What are your favorite aspects or examples of this often-underappreciated genre?

The Old West has a mythic feel. It is the perfect backdrop for a clash between good and evil, and larger than life characters who must survive by their grit and guts. It’s a great setting to cross-pollinate with horror and fantasy.

What inspired you to write this story?

The fun of writing tough as nails characters, and my love of monsters and the western genre. My imagination feels really in tune with this setting. The story just poured out of me. It’s almost like ole Captain Sidacious Tomlinson snuck up behind me and shoved the barrel of his Colt revolver to my back and said “get ta’ writing!”

If you were living in the Weird West, what kind of character would you be?

A monster-killing, whiskey drinking, sure-shot who makes deals with the devil only to win his soul back with a good hand at poker.

Are there any other writing projects you’re working on?

Just finished my first novel, Clay Boy. It’s about a bullied middle schooler who creates a imaginary friend who becomes self-thinking and takes revenge on his bullies (publisher to be determined), and I’m starting my new novel, The Mary Windsor. It’s about a pirate ship, and its crew, being stalked by a certain type of sea monster as they slowly lose their minds, you know, it’s a love story? LOL!

What are you reading right now?

Always have two books going – Predator, the 80’s movie novelization by Paul Monette and Cult of Glory: The Bold and Brutal History of The Texas Rangers by Doug J. Swanson.

Favorite weird west movie/book/comic/etc. and why?

Comic: Jonah Hex: The comic and not the movie.

Book: Dead in the West by Joe R. Lansdale.

Anything else you’d like to add about writing or the Weird West?

If you have never read the genre, but you like horror or westerns, then I suggest giving it a try. You can start with the anthology by Brigid’s Gate Press! Just click on my Author Page link below and you can order it. I get the feeling we are about to see a golden age of the weird western.

If you enjoyed this profile, sign up for Arcane Saloon, the Weird West Fiction newsletter, to receive future author spotlights and other related news!