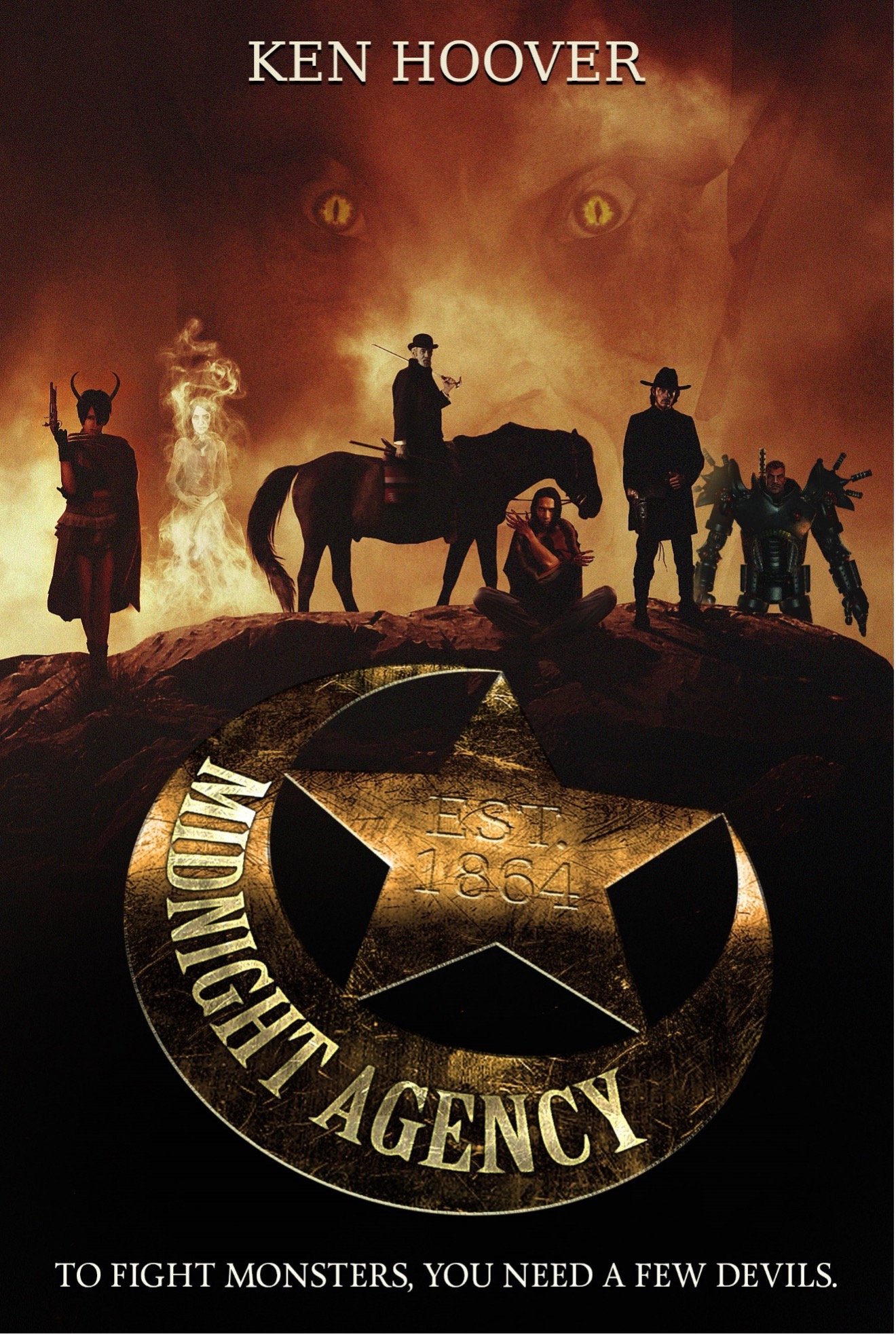 Ken Hoover is the word slinger of two weird western novels in the Midnight Agency series. His short fiction has appeared in magazines and anthologies, and he’s been a semi-finalist in the Writers of the Future Contest. In addition, he’s an alumnus of Superstars Writing Seminars. He lives in New Mexico with his awesome family, surrounded by the dynamic landscape of the Land of Enchantment.

You can learn more about Ken at his website or Goodreads.

About The Midnight Agency

To fight monsters, you need a few devils. In a post-apocalyptic frontier teeming with outlaws, gunslingers, monsters, and gods of death and cruelty, the Midnight Agency has emerged to bring order to the lawless New West.

A crew has been hired to deliver cargo to the Trinity Vault, the last surviving museum of the old world, but when they are hunted by a demonic killer, their only hope is Kory “Diablo” Shaw, a teenager with a devilish secret, who has faced a death god before…and lived.

Tell us about yourself – what is something readers would be surprised to find out?

I grew up in Mesilla, New Mexico, where Billy the Kid was sentenced to death by hanging. (Pat Garrett is buried a few miles away in a Masonic cemetery.) A few doors down from Billy’s historic marker is Mesilla’s oldest building, famously haunted. As a kid, I took that weird west lore for granted. Now, I can’t get enough of it.

What is it about the Weird West genre that draws you to it? What are your favorite aspects or examples of this often-underappreciated genre?

I can trace my interest in the weird west back to my childhood when I picked up a worn copy of a Weird Western Tales comic and my eyes were opened to the awesomeness of gunslingers, outlaws, vast landscapes, and the undead. In the 80s, I loved syndicated western TV shows – The Lone Ranger, The Wild Wild West, Kung Fu – while the radio introduced me to country classics like “Ghost Riders in the Sky” and “The Devil Went Down to Georgia.” I just about lost my mind when my beloved The Muppet Show adapted those songs. But perhaps the strongest influencer was a short-lived 80s cartoons called The Adventures of the Galaxy Rangers, which inspired me to write/draw my own rip-off comic called “Galaxy Law” about bionic-powered space rangers. Flash forward to Firefly, and I fell in love with the genre all over again. Those same roots draw me to the genre now, whether it’s set in the Old West, a post-apocalypse, or space – gunslingers, outlaws, awesome nicknames, dynamic landscapes, ex-soldiers, cool guns, devils, ghosts, monsters.

What inspired you to write this story?

I wanted to fill the void that Firefly and The Dark Tower had left behind, so I wrote a short story about a recruit with a cursed gun who is partnered with an older agent to investigate a series of mysterious crimes. It had potential for something big, so I wrote the first Midnight Agency novel and filled it with everything I wanted to read in the genre—supernatural landscapes, a captain with a mysterious past, a ghost talker, a devilish teenager with a cursed pistol, steampunk technology, a skinwalker, witches, monsters, angels, devils, and dark gods.

If you were living in the Weird West, what kind of character would you be?

I’ll answer this in a different way. If I existed in the Midnight Agency storyverse, I’d be more like Mingan. He’s the lone wolf of the group, a man who is uncomfortable in his own skin. He’d much rather be scouting ahead and cutting for sign than mingling. Yet he has a fierce loyalty to his team.

Are there any other writing projects you’re working on?

I’m all over the place. I’m trying to sell a contemporary, middle-grade fantasy series and a handful of short stories of various genres, while my work-in-progress is an awesome crime fantasy novel that I’ve been wanting to write for years. After that, I’ll draft the third book in the Midnight Agency series. Between family time and my day job, there isn’t a lot of time to write, but I’m making it happen. I have many stories to tell.

Learn more about Ken Hoover and His Weird West Tales: